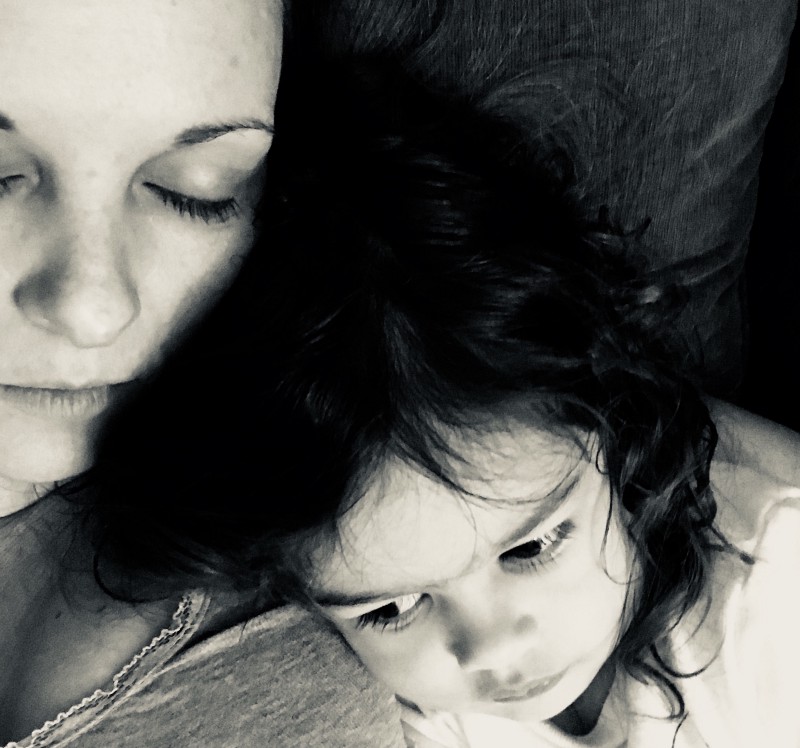 I couldn’t tie my shoes, or even see them anymore, my vision obscured by a mess of soft, dark brown curls. My toddler had a death-grip on my neck, allowing me only micro movements as she pleaded, “NOOOOO! No, mama. I come, too.” She turned to stare up at me with her sad, giant brown eyes, furrowed brow, and turned-down lip, still keeping a tight grip. I sighed. “Should I just quit my job and stay home all day every day?” I asked her. “YES,” she nodded fervently, never loosening her grip. I wasn’t sure if she really understood what I was saying, and I thought about what it meant myself.

Being a stay-at-home mom was something I thought about regularly, ever since she was born, and especially after long weekends and vacations. We had gotten into a rhythm in the past 10 days. Vacation meant lazy mornings, long walks, and disregard for rules about sugar and screen time. It was probably not an accurate representation of what it would be like to be a stay-at-home mom, but it did give me some idea.

“I would love it,” I whispered to her. After a moment’s pause, I added, “but I have to go to work.” The nanny was watching us, trying to figure out how to be helpful, with a puzzled look on her face. I can only guess what it meant, so I’ll just project the thoughts that were in my head at the time: why? Why did I have to go to work and hire her to look after my child? My mother in law had asked me the same question when my daughter was only a few months old, and my husband had cut her off before I could answer her. I was hurt by the question because it had been such a difficult decision.

The immediate response was that we needed the income. I brought in half our household income, and I made a lot more money than the nanny. I also happened to love the company I worked for, and it had long been my dream company, even before I worked there. In addition, we needed the generous benefits my job provided, including good health insurance and unlimited sick leave. We had taken full advantage of the benefits of my job in the past year, having had health conditions that landed us in the emergency room, and eventually, resulted in surgery for both me and my daughter.

Beyond the practical reasons, there were two driving forces in my decision keep my job. First, I was afraid to leave the workforce. After my daughter was born, I stayed home with her for about 6 months, and it left me feeling insecure and irrelevant upon returning to work, even at the same job and the same company. How could I take off for an indefinite period of time and then explain that period of absence to future employers? Would they take me seriously? Second, the feminist in me believed that economic independence was critical to women’s equality, and I hated the idea of not maintaining my ability to be economically independent. What if something happened to my husband? I felt I needed to teach my daughter, by example, that women can have careers, so that she never felt trapped in bad situation due to lack of economic independence.

For these reasons, I peeled my pleading toddler off my body, kissed her goodbye, and left for work. I tried not to cry on my commute. I expected leaving her to get easier after some period of time, but it never did. She was over two years old, and it still wasn’t any easier to leave her. Soon, she would start school, and she would be the one leaving me every morning, until she eventually moved out of my house and only saw me on special occasions.

The last thought made me want to immediately quit my job every time it crossed my mind. In an effort to self-soothe, I reminded myself that my husband also had to go to work each morning and leave our daughter behind. But it wasn’t really a fair comparison. For one thing, it wasn’t his neck around which she had a death grip. She wasn’t pleading with him to stay. She wanted “mama” to stay. And although he often missed her while he was at work, he admitted that being a full time stay-at-home parent didn’t really appeal to him. So it wasn’t the same, and although I had hoped it would help me cope, it didn’t.

Still in search of comfort, I thought about all the moms who didn’t have a choice in whether they would stay home or go to work. Single moms. Moms whose incomes were indispensable to their family’s survival, unlike mine, which mostly just elevated the comfort of our lifestyle. This didn’t help either, because it just made me feel like I was wasting the privilege I had. I had the option of staying home, and I wasn’t taking it.

All these thoughts sent me into a temporary spiral of anxiety, guilt, and shame. The fundamental question I asked myself was: was it worth it? What was I gaining from working, and did it outweigh the benefits of staying home with my daughter for a few months before she started preschool? I could engage in an extensive pro and con list for each imagined situation, but I knew that ultimately, there was no way to know the answer to this question. If I had chosen to stay home with my daughter, I would be asking myself what it might be like to be at work and have a career. There was no parallel universe in which another version of me chose to stay home and loved it.

All I could do was find a way to live with the voices in my head, which were often unkind. Sometimes they echoed external sources, like my friend who casually mentioned that her mom chose to stay home with her and her sister because “she wanted to raise her own children.” As if I weren’t raising my own daughter because I had a nanny. Sometimes they echoed the voices of friends or acquaintances casually asking where my career path was headed at my current job. I didn’t have a good answer, which begged the question: why keep going? Often, the voices in my head stemmed from my own insecurities: you are not essential to the business. You don’t have that great of an impact on the outside world. You’re not a genius. The working world doesn’t need you. These voices needed to be smacked down.

Aside from managing the voices in my head, there was no resolution to my situation. There wasn’t a “right” answer. I had to accept that I was doing the best I could to make the best decisions, given the circumstances, and be kind to myself about the path I had chosen. The silver lining for me was that I treasured the time I did have with my daughter, and I knew she felt that. Hence, the death grip around my neck, the furrowed brow, the turned-down lip, and the tiny voice shouting “NOOOO” in my ear. I suppose then, despite all my insecurities, I must be doing something right.